The Paradise-Opoly Board Game Release Party and Fundraiser 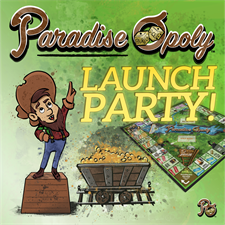 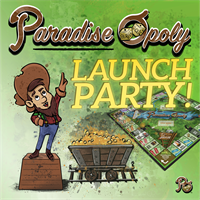 COME CELEBRATE THE OFFICIAL RELEASE OF PARADISE-OPOLY!
LIMITED TICKETS AVAILABLE TO THIS GRAND OCCASION!
After close to 4 years of development we finally get to celebrate the launch of Paradise-Opoly. What better way to celebrate this monumental release than the same way we started developing it? TOGETHER! If everything stays on schedule we will be holding the launch party the day before the official release of the game. Right now the party is being planned for December 2nd, 2022. The location is still being confirmed but we are most likely doing it at the new Elks Lodge in Paradise. We are curating a fun and memorable night to include food, drinks, games to play, lots of memorabilia of the game development, a raffle contest with lots of prizes from different local vendors as well as some silent auction items for some really cool original hand-drawn artwork from the game. We’ll also have music, dancing, photo ops, trivia contest and I’m sure I’ll be making a speech or two at some point

.
My original purpose when I first thought of doing this game was to be able to raise some profits to donate to the recovery efforts of Paradise right after the fire. At the time, I never thought it would take as long or cost as much as it has to actually get it made. I’ve essentially created a small startup company to accomplish it with mainly myself behind the wheel to figure it out and get it done. The reality is it could be some time still before I reach any kind of net-profits to be able to donate. That is why I am making this launch party a stand-alone fundraising event of which all the proceeds will be donated to the local non-profit, Regenerating Paradise, who is doing fantastic work to bring more affordable, low-income housing projects to the Ridge. During this time of skyrocketing construction prices and housing costs this is more important than ever.
Tickets will now be on sale for the event at $25 per person if bought online in advance. They will be $35 at the door if there are any left. It's likely to be a sold out event as there are limited tickets available. Your ticket cost will include food, one drink ticket and two raffle tickets to get you started. But you’re going to want to buy more once you see all the great raffle prizes available! The silent auctions will have a set reserve price that is TBD.
Being auctioned are some one-of-a-kind original artworks from the game that were hand-drawn by Paradise local, Aja Mulford, who I was in art class with at PHS(Mr. Wrobel was the coolest!). These are so cool and I’m actually going to have a hard time parting with them but I know that someone will appreciate them greatly. Each original artwork will be signed, matted and mounted in a hand-made cedar frame with glass. The frames are being made by my father, Andy Stauss, who has been my biggest fan on this project and is my biggest fan in life. He has done woodworking and built houses pretty much as long as he’s lived and is finally getting back into it after having lost 100% of his shop and tools in the Camp Fire. To say the least, each of these keepsakes will have been crafted with pure heart and passion.
As for the rest of the raffle prizes most, if not all, will be great items donated from local vendors. I hope for this to be a fantastic turn out so we can raise lots of money for Regenerating Paradise.
There will be more details to come but I am so excited for this grand milestone to be shared with you all. As said before, the party is tentatively planned for Friday, December 2, 2022. It is possible, if the release is delayed for any reason, we will push the party to the following weekend. We just want folks to have a heads up so they can plan accordingly during the holidays.
The current release date goal is December 3rd, 2022. If you have followed this project for very long, you know that this is still not guaranteed. We'll just say... it's highly likely

With everything going as planned, we will reach this goal. Everyone keep their fingers crossed the ship makes it over quickly and safely. I have also already taken every measure I can to help in the shipment moving smoothly through customs in Long Beach.
Much more to come but if you don't have your ticket to the party make sure you get one!
Tickets can be purchased HERE!: https://www.paradise-opoly.com/product-page/paradise-opoly-launch-party-tickets 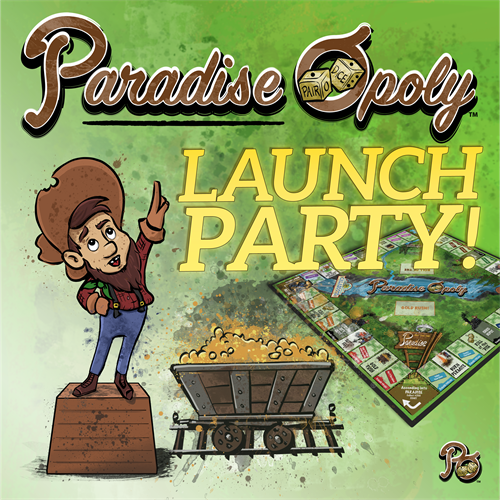 As of now the party is scheduled to begin at 7:30pm and go until about midnight on December 2, 2022.

The event will be held at the newly rebuilt Elks Lodge in Paradise and will be a ticket only event. Tickets can be purchased online or at the door if not sold out.

Ticket price is $25 if purchased in advance online at: https://www.paradise-opoly.com/product-page/paradise-opoly-launch-party-tickets

If tickets are not sold out prior to the event the remaining tickets will be sold at the door for $35.

Google Yahoo iCal (Outlook, Apple, or other)
Scroll To Top